In my previous post I discussed a citation I received from the Panamanian National Police, which I later learned was a request by Mr. Sigler for a retraining order against me. I also posted an image of the document submitted by Mr. Sigler, where he outlines the basis for his request. 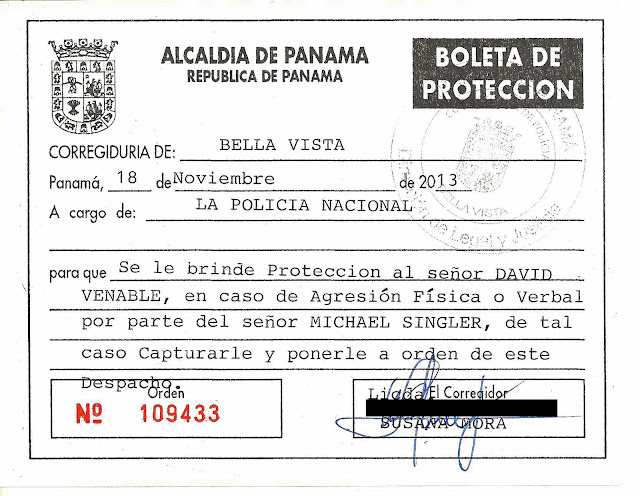 Also, I believe this resolution that was given is another example of how inefficient the Panamanian system is. Instead of making a decision, based on the facts, they issue a resolution, based on lies and half truths, in an attempt to try to please both parties, and wipe their hands clean of the responsibility of doing a proper and thorough job.

As I mentioned in my previous post, Mr. Sigler claims that on October 15, 2013, I arrived at a local restaurant, while he was having lunch with his family, and began handing out flyers in the restaurant, as well as in the streets. As I've stated before, this claim is untrue. To elaborate my side of the story, I was nowhere near the restaurant that Mr. Sigler claims I was at, and I have witnesses to confirm this.

Nonetheless, Mr. Sigler was not able to prove his false claim in court. I will pursue this attempt at obtaining a restraining order via false claims, and I can only imagine how Mr. Sigler will attempt to argue the sincerity of this claim.

In any event, the criminal case has been filed, and Mr. Sigler will eventually have to answer for his actions in court. It will be interesting to see how Mr. Sigler will attempt to contest the charges that will be brought against him.

Posted by Harmful Drugs at 2:05 PM No comments: